As a homeowner with a pool in Columbia County, NY you are required to adhere to certain regulations regarding pool safety barriers in your home as mandated by New York State. Such state requirements include:

As a homeowner in Columbia County, meeting this list of requirements most likely seems daunting, but this is where Life Saver of Upstate New York comes in! We make things easy to you. Call us and we will help you find just the right mesh fencing to meet these requirements.

Protect Your Family From Accidental Drownings

Drowning is a real danger in homes with pools and is a danger that parents cannot afford to ignore, in fact, unguarded pools are considered to be more dangerous than a loaded gun!

If you are a parent or grandparent who has young children in your home at any time, installing a safety barrier around your pool is a must. The facts regarding accidental drownings are scary, the U.S. Consumer Product Safety Commission reports that approximately one in five people who die from drownings are children under the age of 14. While the CDC reports that drowning kills more children ages 1-4 years than any other cause of death with the exception of birth defects.

The Benefits of a Life Saver Pool Fence to Columbia Homeowners

You’re now convinced you need a pool fence for your home, but why should you choose to install a Life Saver pool fence? The short answer is because we take your family’s pool safety as seriously as you do.

However, the reality is, the reason why so many families choose to have a Life Saver pool fence installed in their home is that we provide homeowners with the safest and strongest mesh pool fence available on the market.

Our fences are the strongest, most durable fence around, and exactly what you need to protect your family from the potential dangers of your pool.  They are even strong enough that to withstand rain, hail, cold, snow or whatever else a harsh upstate New York winter will throw at it. Or, our portable pool fences can be taken down and stored in the winter should you choose to do so.

Additionally, our patented poles used for our pool fences are the strongest available in the industry and the mesh we use is nearly indestructible making our fence the most ideal option for any homeowner.  Plus, our fences are backed by a limited lifetime manufacturer’s warranty.

When it comes to our team of expert installers, we ensure that all of our pool fence installers are the best-trained in the pool fence industry. You will never have to worry about having an inexperienced installer working on our pool. Every year we send them to training and safety seminars that are provided by our parent company Life Saver Pool Fence to ensure they are familiar with our products, installation techniques, and new upgrades.

Plus, our Solid Poles are patented and known to be the strongest in the pool fencing industry. 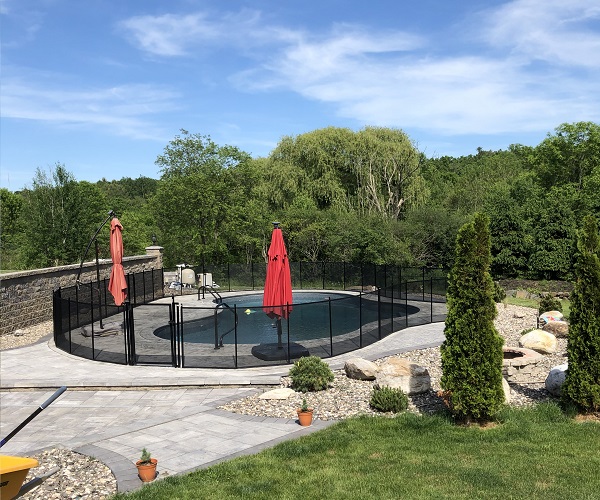 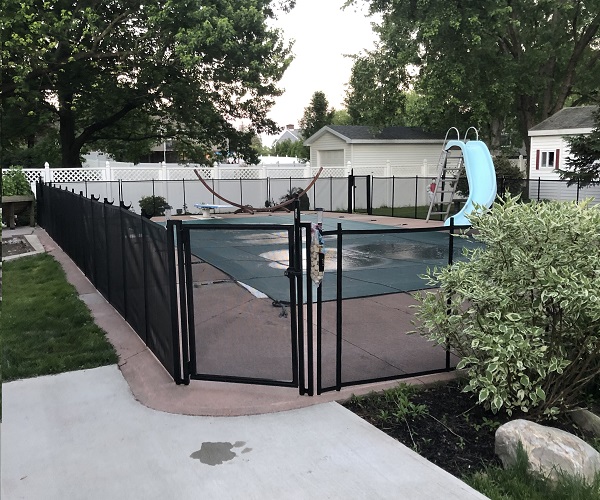 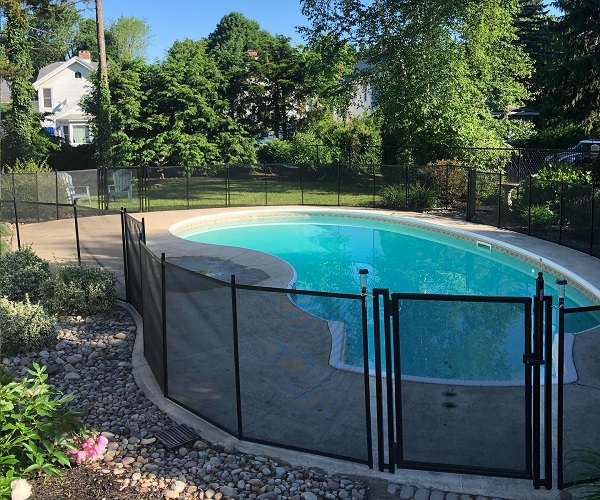 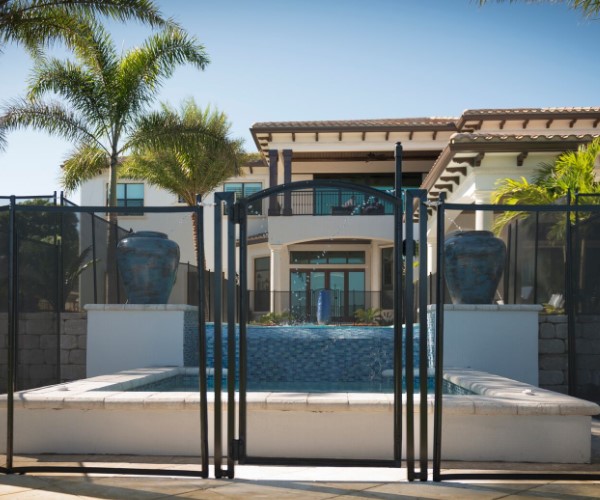 Pool fences no longer need to be an unsightly addition to your backyard. In fact, the mesh we use is nearly transparent which means you not only can easily see the water while your children are playing in the pool, but it’s aesthetically pleasing as well. Homeowners have the option of customizing the color of their fence and poles to match the theme of their yard. Which means you won’t have to choose between aesthetics or safety.

The first step in getting a Life Saver pool fence installed in your home is to call us to receive a free estimate. We’ll come to your home, where you’ll show us exactly where you want the fence to run. We’ll take measurements and discuss your options with you. From there we’ll send you an estimate containing everything we discussed and once you’re happy, we’ll schedule an installation date.

We understand that you may need to have your new pool fence installed as quickly as possible which is why we do everything we can to install your fence as soon as possible. Once you have decided on the fence and scheduled your installation, the installation process itself only takes a few hours!

Yes, I Want To Schedule My Estimate

Columbia County is a county located in the U.S. state of New York. As a census taken in 2010, the population was 63,096. There are many pools in this County, the exact number of which is not determined. The county seat is Hudson. The name is derived from the name Christopher Columbus, which was at the time of the formation of the county was considered to be a popular proposal for the name of the United States.

Get Your FREE Estimate Here!